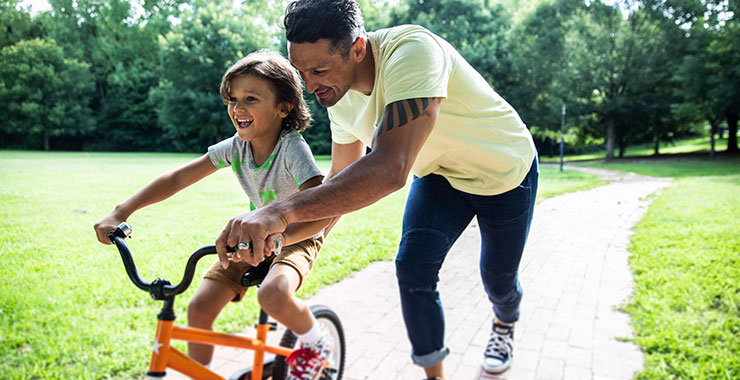 Full disclosure, I’m not a fan of vague statements and the current social media trend of “quotables.” I believe that God has given us words and the gift of communication to bring clarity to situations, bring light into darkness, and direction into confusion. However, I find most of these types of statements really do none of these things. They instead usually ignite debate, depending on how the person reading or hearing defines the words within them. Along those lines, my biggest pet peeve is someone who uses their words to make things less clear, more confusing, or more divisive. Nothing gets under my skin more than this!

So, that being said, I’ve noticed that sometimes we have a tendency as parents to use buzz words and phrases that we have heard in parenting books, classes, or social media in very interesting ways. We take hold of these pithy and somewhat cliche phrases that on the surface seem very spiritual or noble, but may not be as helpful as they seem. In fact, they may unintentionally be leading your family away from God at times instead of toward him!

These saying are usually just vague enough that we can use them in almost any situation to justify whatever we are doing! We throw them around without taking the time to think deeper about what we are saying when we say them. Instead of testing these sayings and thought processes with Scripture and gospel, we use them to help soothe ourselves into believing we are doing the right or “best” thing.

Here’s a couple of examples that are the most popular:

“I just want my child to be successful.”

On the surface, these two sentences, when spoken by a parent, would be admirable, and would  probably not be frowned on by anyone. In fact, it’s pretty safe to say that any loving parent would say these things about their family and their children! But the reality, if you think a little deeper about them, is that these two sayings and thought processes, and many others like them, can be used to justify an innumerable amount of unhealthy decisions that parents can make for their families.

The reason circles back to my initial pet peeve.  These short and cute statements can be used in many different ways depending on how I, or you, or anyone, decides to define the key words within them. Let’s look at both of them.

No doubt you have said or heard this statement as a parent. Sometimes “I want more for my child(ren) than I had when I was their age,” becomes the fuller sentiment. And while it is wise to learn from your past and use it to help define your family’s and your children’s future, the problem is that the word “more” is one of those very vague words that can be interpreted in a myriad of ways. For most of us, when we use the word “more,” we aren’t using in a spiritual or biblical sense, and this can quickly become a problem. Here’s some examples:

Some parents use “more” to justify exorbitant purchases that they can’t afford and that puts stress on the marriage, because for them, “more” means more stuff than they had.

Some parents use “more” to involve their children in every possible activity that’s available despite it leaving them no time for anything else, because for them, “more” means more opportunity than they had.

Some parents use “more” to aggressively fight for their children when they think they have been wronged or not given a fair chance, because for them, “more” means more representation or influence than they had.

Some parents even work endless hours to the point it disrupts their family, because for them, “more” means more money than they had.

I hope you can begin to see the problem with throwing around the phrase, “I just want more for my children.” It can lead to parents defending and justifying everything we do in the name of “more,” without realizing that the definition of this “more” changes to suit whatever we feel we  need in the moment.

Jesus had a different understanding of “more.” There is an event in Mark 12 in the New Testament where Jesus and his disciples were at the temple, and Jesus was watching the crowds throw their offerings into the “offering plate.” A poor widow happened to come through the line, and put in two small copper coins, which in today’s society, would have equaled anywhere from a couple cents to a couple dollars – a very small amount. Jesus called his disciples over, and told them that the widow put in everything that she had, and even though it was a smaller amount than anyone else, he added that “this poor widow has put more into the treasury than all the others.”

Now, did the widow actually put more in? No, and yes. From the world’s perspective, and based on simple math, she definitely did not put more in than anyone else. She put much less. But in God’s economy, the actual value didn’t matter at all. (As a side thought, this is probably because it’s all God’s anyway!) What mattered to Jesus was the amount of sacrifice and not the amount of money. Jesus’ more was defined very differently that the world’s more. Jesus saw more in a spiritual sense that most of us have never considered.

Could you have imagined if the richest person in the temple would have been told that the widow put more into the offering than he did? I’m sure he would have been absolutely shocked! He even could have probably listed off a hundred different ways that he was more blessed and more capable of serving God than the poor widow. But still, Jesus says the widow gave more than all.

“More” looks very different in God’s eyes than in the eyes of the world. For the world, “more” will always be defined by the things in this world – more money, more stuff, more opportunities among peers, more representation in front of others, more advancement in income, popularity, and comfort here on this earth. And of course, because of the way our world works, the end message becomes that more money will help your family achieve more.

“More” in God’s eye’s is instead always focused on things not of this world – things that can’t be as easily seen or measured here. This would be things like more spiritual growth through godly relationships within the family and with friends, through sacrifice for others and for the kingdom, and through guidance from parents and the church. In God’s eyes, it’s really doing more hard things that have an eternal impact instead of an earthly one. For God, more money doesn’t achieve more. However, better relationships, more sacrifice, and parents being more present, do.

While the world tries to define “more” in set terms of a certain salary, an age of retirement, a set amount social media influence and likes, the spiritual truth is that more looks different for different people. A family giving $100 to the church could actually be giving more than someone giving $10,000. A child that is not as strong a learner who memorizes one Scripture could actually be accomplishing more than another child who easily memorizes 50. A parent who makes $50,000 but spends time every day with his children could actually be providing and leading his family into more than the parent(s) who makes $300,000 but is never home. A family who eats spaghetti every night around the table, together, may be accomplishing more than a family who gets take out on the go every night because they are too busy chasing “more” to eat together.

Parents, don’t fall into the trap of believing your children don’t have “more” because they have less stuff, opportunities, or experiences than another child. Believing this will lead to a life of despair, unhealthy striving, and feelings of failure. It’s a trap that will divert your attention and energy away from Jesus’ definition of “more” and toward a vicious lie that many in this world are chasing.  And don’t think that your income in any way limits your ability to provide “more” for your children. The “more” that your kids need is not of this world. If the widow can give “more” by simply giving a couple of dollars, you also can give “more” to your children with little to no money.

Colossians 3:2 says, “Set your minds on things above, not on earthly things.” I would encourage every parent who would say they want “more” for their children to go a step further and define exactly what the “more” is that they are talking about.  And then take time to evaluate how your “more” lines up with God’s “more.”  Does your “more” reside here on earthly things, or on things above?

Need help navigating the campus or connecting with Gateway families or ministries? Our WELCOME MINISTRY can help!